Iliotibial band syndrome (ITBS) is a condition that affects runners and other athletes that causes pain in the lateral (outside) part of the knee. It is an inflammation of the lower part of the band that inserts on the outside of the knee caused by the IT Band rubbing over the bony part of the lower femoral condyle. The IT Band is a thick band of ligament that at its upper portion has the Gluteus Maximus, Gluteus Medius, and Tensor Fascia Lata muscles connecting to it, and it then runs down the outside of the leg to insert in the lateral side of the Tibia. The IT Band works to control the outside of the knee, and to flex the knee. ITBS can be caused by many factors such as overuse, weakness of the hip abductors (Gluteus Medias, Tensor Fascia Lata), improperly made shoes, bad feet (pronators), running on a canted or crowned surfaces, circular track running, and a high Q angle (the angle that is formed from the hip to the knee that causes a knock knee, or bow leg deformity).

Symptoms may present at the end of a run in the beginning of this problem, but more severe and untreated cases may prevent you from running even short distances. Often there is associated stress on other muscles in the kinetic chain. This can be weakness and tightness in the Quadriceps, Tensor Fascia Lata, Psoas, and hip abductors. Training may also contribute to the development of ITB syndrome. It is always important to look at your training routine and see what changes have recently occurred. A rapid increase in running distances, speed work, hill work, and time spent running often precedes the development of this injury.

Treatment of ITBS should include all of the following:

Ice, rest, decrease in training and or changes in training regimen, stretching of the IT Band and associated muscles, massage or foam rolling of the lateral quadriceps and IT Band, and strengthening of the hip abductors all. If none of the above treatments resolve the problem a sports medicine professional should be consulted. This could be an orthopedist or other medical doctor who could refer for physical therapy, a chiropractor, or a massage therapist. Deep tissue massage, and Active Release Techniques to the ITB, Quadriceps, TFL, Psoas, and hip adductors are highly effective in treating ITBS. Last resort treatments include cortisone shots, or a surgical procedure called a lateral release. These last resort treatments are used for cases that do not respond to any form of treatment and rest. 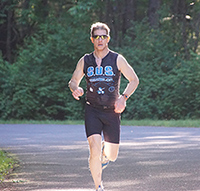